Recalling the shops in Blackrock in ’60s

My 5 favourite Holly Bough covers: View 85 of them online now 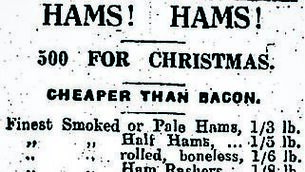