Cork holds its breath for election results, and Echo has tourist tips for Mars!
echoes of our pastcork historycork nostalgia
 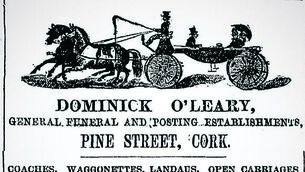