Watch: Youghal train in the 70s... do you see yourself or someone you know in the crowds?
echoes of our pastcork history
 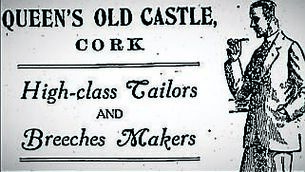