Man who shouted obscenities at gardaí given suspended sentence 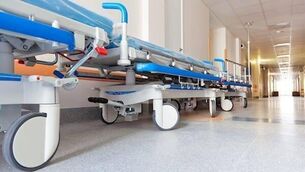 CUH had 1,145 patients on trolleys in January