'My door is open': Deirdre Forde pledges to be a 'listening' Lord Mayor of Cork
rnlikinsale
 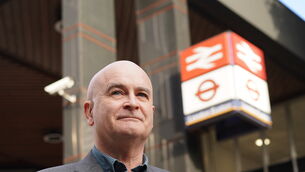