Cork court: Jail for man who tried to choke a garda and kicked him in the genitals
homelessnesscork city centrecork city council 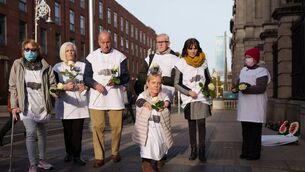