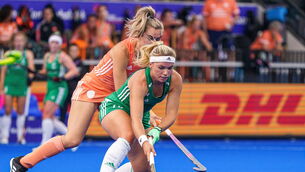 UCC's Perdue starts but Netherlands prove too strong for Ireland