Refusal to subsidise antigen tests 'will leave people behind'
 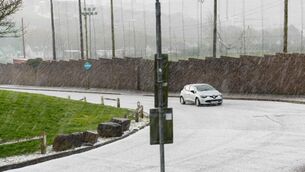 Road warning issued as risk of hail and sleet forecasted