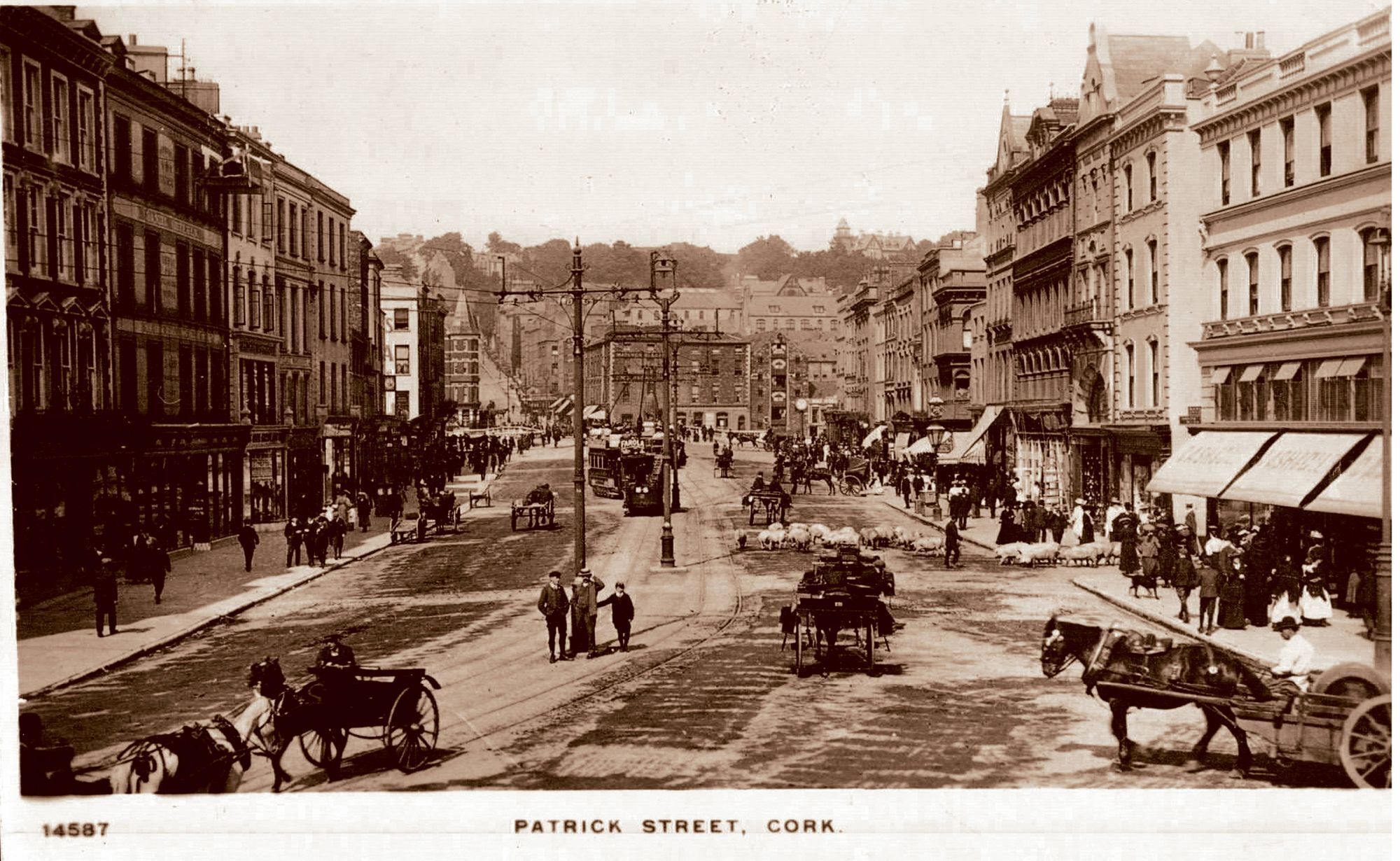 The date was Tuesday, June 14, 1892, and on the streets of Cork, a new newspaper burst onto the scene: The Cork Evening Echo.

Fifty-one years after launching the Cork Examiner, the Crosbie family had decided to introduce an evening newspaper which would bring the latest news of the day to the Victorian streets of the city and county.

A hundred and thirty years - and around 140,000 editions later - later, and the Echo (the Evening was dropped when it became a morning paper in 2019) is still going strong .

Those first editions in 1892 reported on the imminent UK General Election, held from July 4-26. The Irish Parliamentary Party had just suffered a devastating split caused by news of Charles Stewart Parnell’s scandalous relationship with the married Katharine O’Shea.

At the time the Echo launched, Cork were reigning All-Ireland hurling champions, having beaten Dublin in the final the previous March. Cork, represented by club side Redmonds, were leading 2-3 to 1-5 when the Dublin side left the field in protest at a disputed goal. It was the Rebel County’s second All-Ireland title — the start of a three-in-a-row.

Also in 1892, free primary schooling and compulsory education up to age 14 was introduced via the Irish Education Act, while Liverpool FC was founded, and the first Sherlock Holmes story was published by Arthur Conan Doyle. 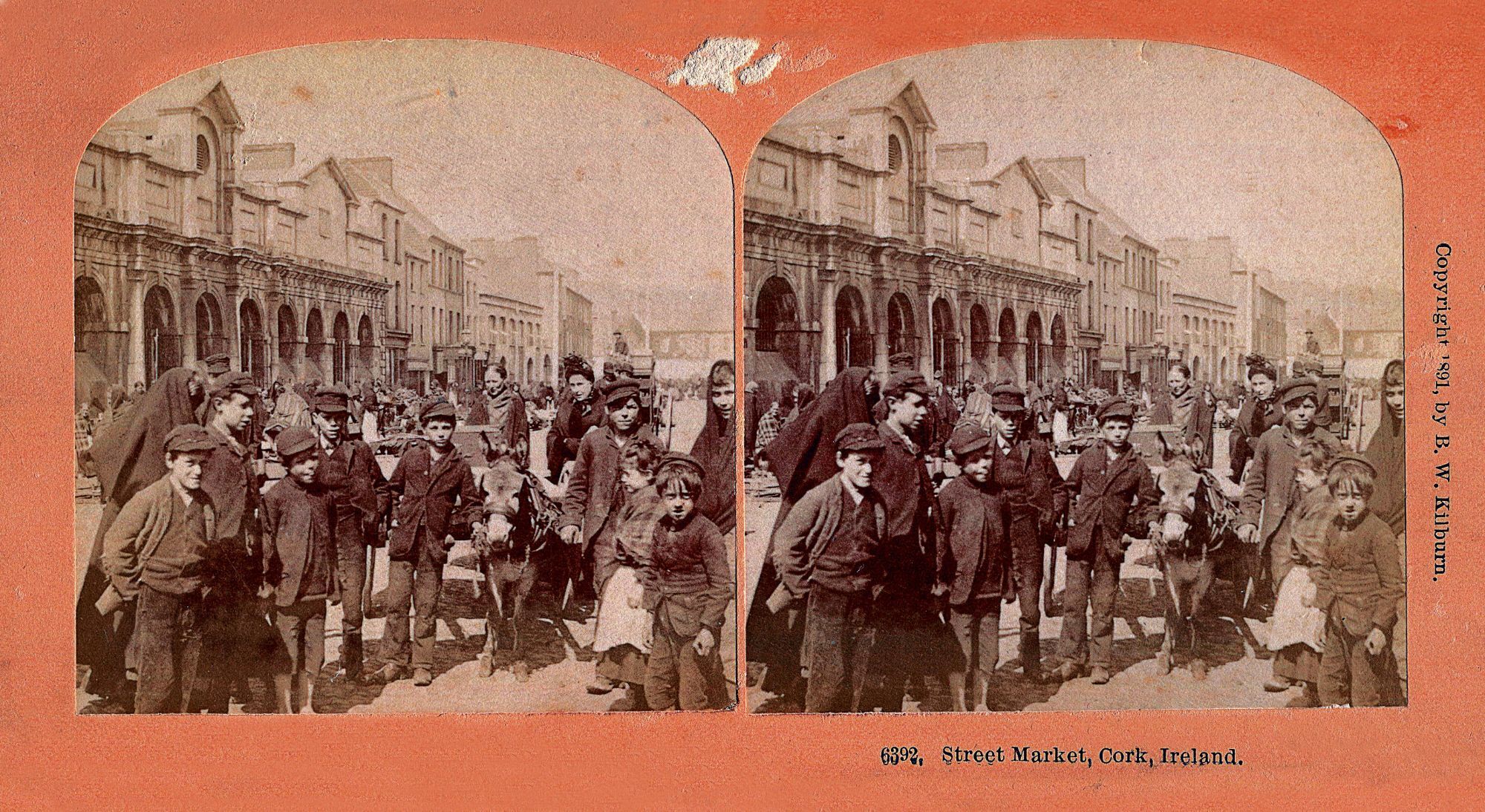 The launch of the Evening Echo was a seat-of-the-pants affair for all involved, from printers to journalists, distributors to street sellers. The planned launch date of June 20 had been hastily brought forward by nearly a week on commercial grounds, after management at the Examiner got wind of a rival publication eyeing up their territory.

They heard the Cork Herald was about to bring out an evening title so the Echo was rushed onto the streets on June 14, 1892, six days ahead of schedule, to get to its audience first and urge its readers to beware of pale imitations! It cost a halfpenny.

It proved to be a wise move as the Echo remained the sole daily evening newspaper produced in Cork, and was the oldest evening newspaper in the country when it successfully re-branded to a morning paper three years ago.

Sadly, those early editions of the newspaper — which was a broadsheet until 1991, when it became a tabloid — have not survived.

The earliest surviving copy of the Cork Evening Echo dates to four years after its launch — Wednesday, May 6, 1896. Three pages of that day’s paper are archived on microfilm at the National Library of Ireland.

The earliest surviving physical copy of The Evening Echo, which is now housed at the National Library of Ireland. 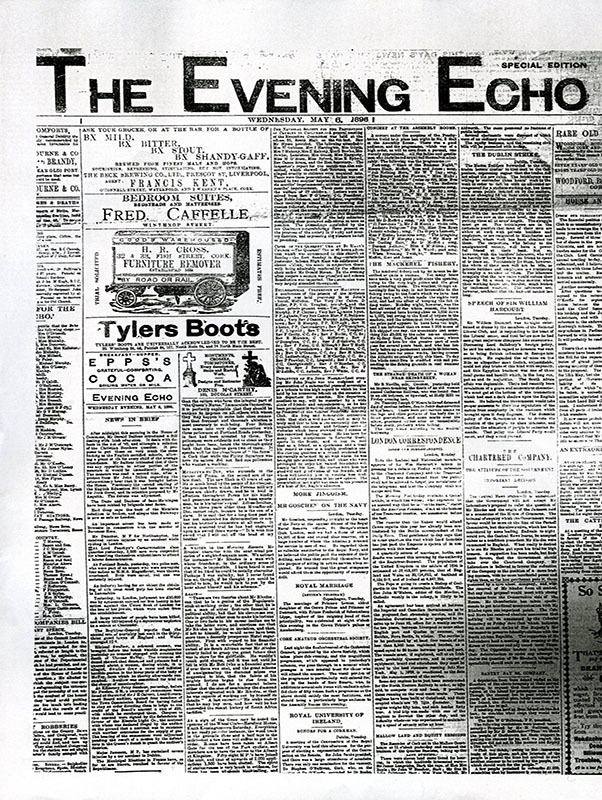 As was common for newspapers of the era, adverts took prominence on the front page, and stories ran, often to great length, in small print along a single column width.

By all accounts, that first edition of the Echo was a good read, despite the taut deadline. The next day’s Cork Examiner hailed the new “young adventurer” in its stable and declared: “Considering its hurried preparation, and having regard to the numerous drawbacks incidental to a first issue under the most favourable circumstances, we do not see any reason to blush for the new production.

“Its conductors mean to make it the brightest, liveliest, and most readable halfpenny worth of news to be found south of the metropolis.”

That halfpenny — half the price of its morning sister — helped total takings from the first edition realise the princely sum of £3-7-6.

Early editions were printed on pink paper, perhaps to set the title apart from the Cork Examiner on the news-stands.

Interestingly, there had been an attempt to launch a Cork Evening Echo two decades earlier, in 1872, by Frederick Potter, of the Skibbereen Eagle, but it folded a year later.

Also in 1892, an Evening Echo was launched in Dublin, published by Philip Taylor of Middle Abbey Street, and described as “a Unionist newspaper”, but it closed in 1895.

The reasoning behind the new evening newspaper in Cork was to fill what was seen as a void in the 24-hour news cycle covered by the morning Cork Examiner.

The Echo thus concentrated heavily on breaking news, both near and far, local, national, and foreign, a policy which it continues today, alongside a more modern and expansive features section, with various supplements. Sport has always played a big part in the Echo’s success as well. 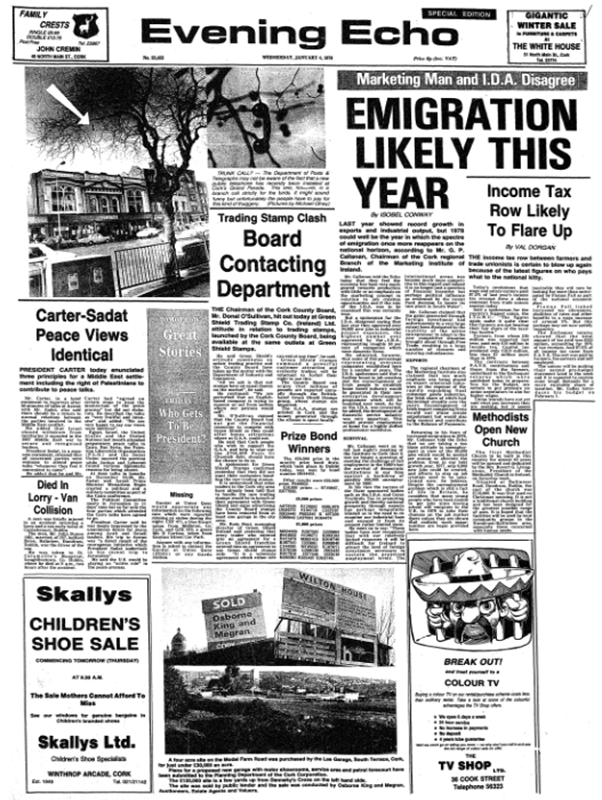 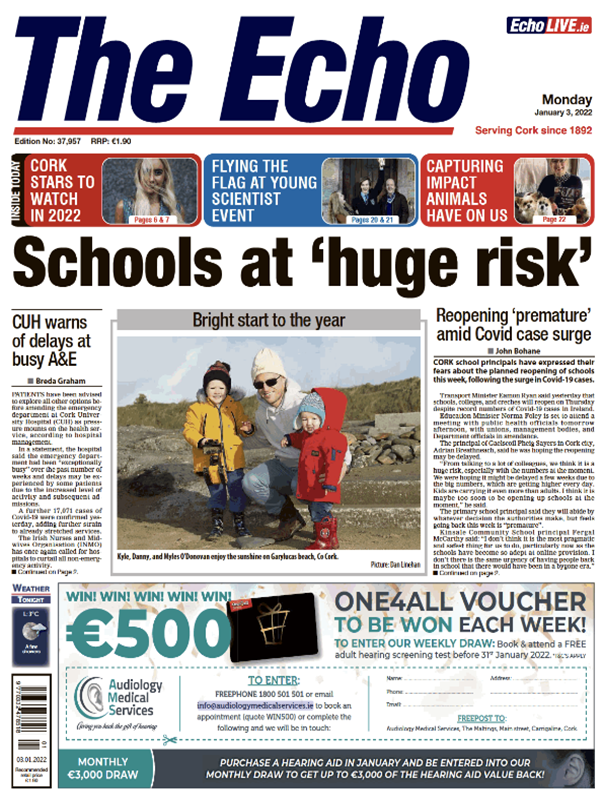 There have been testing days down the years when the newspaper almost failed to hit the streets. One came in 1921 when a strike crippled production of the newspaper. Senior management worked day and night to produce the edition, but found there was nobody to distribute it once it had been printed.

As the papers piled high on the street, guarded by pickets, a Black and Tan ambling down Careys Lane stopped and enquired as to the problem. When told of the strike, he took a revolver out of each pocket to resolve things and the picket promptly dispersed!

Indeed, the only time industrial action prevented the Echo — or the Examiner — from publishing was a single day in 1972, owing to a nationwide strike by the National Union of Journalists.

A six-days-a-week operation, from Monday to Saturday, the Echo also produced special Sunday editions during the Great War to record the conflict’s more notable incidents.

Perhaps the most famous edition came out on Sunday, September 3, 1939, announcing to the worried people of Cork the details of British Prime Minister Neville Chamberlain’s speech that Britain was at war with Nazi Germany. The Echo went on to predict the disruption and toll on human lives that would ensue, both here - despite Ireland’s neutral status - and abroad.

During the Emergency years in Ireland, the size of the Echo was reduced to a single sheet at times due to paper shortages.

It remained a small product in the years after World War II, when shortages were still acute, and it was 1952 before the pagination was increased to four. News and ads were packed in to provide value for the 1d price, and when the Echo went up to eight pages at Christmas, 1952, the price rose to 2d. 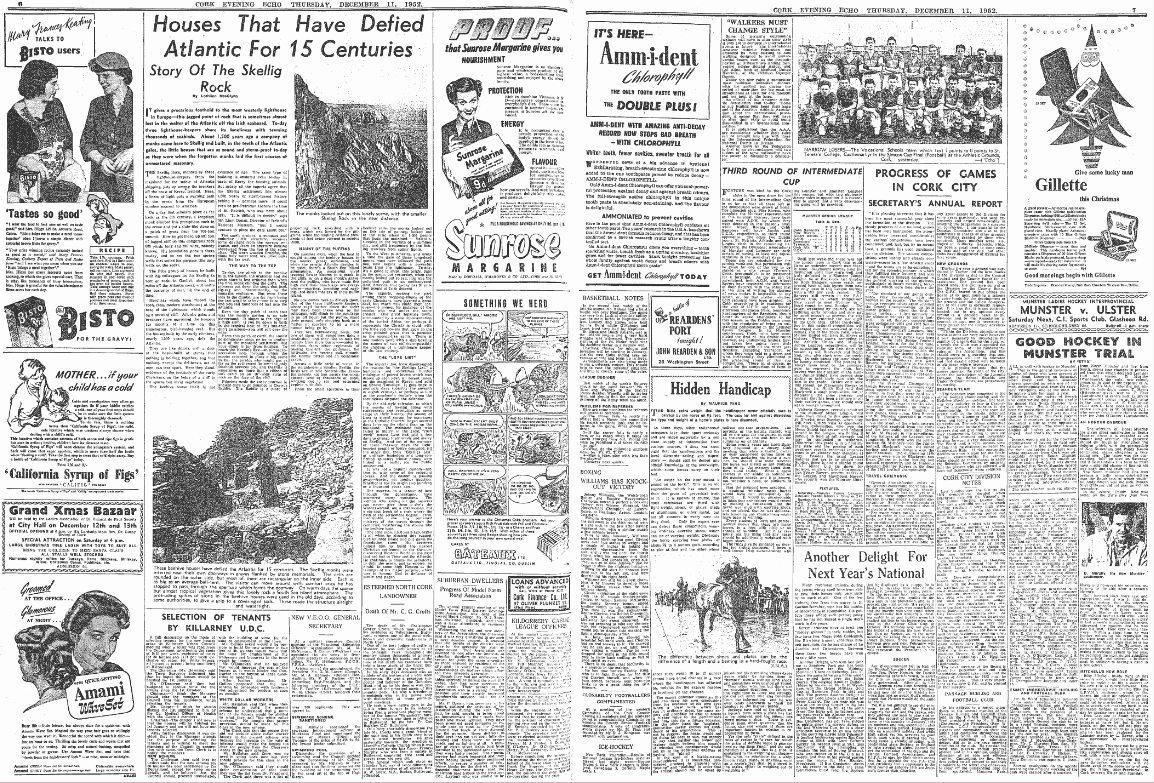 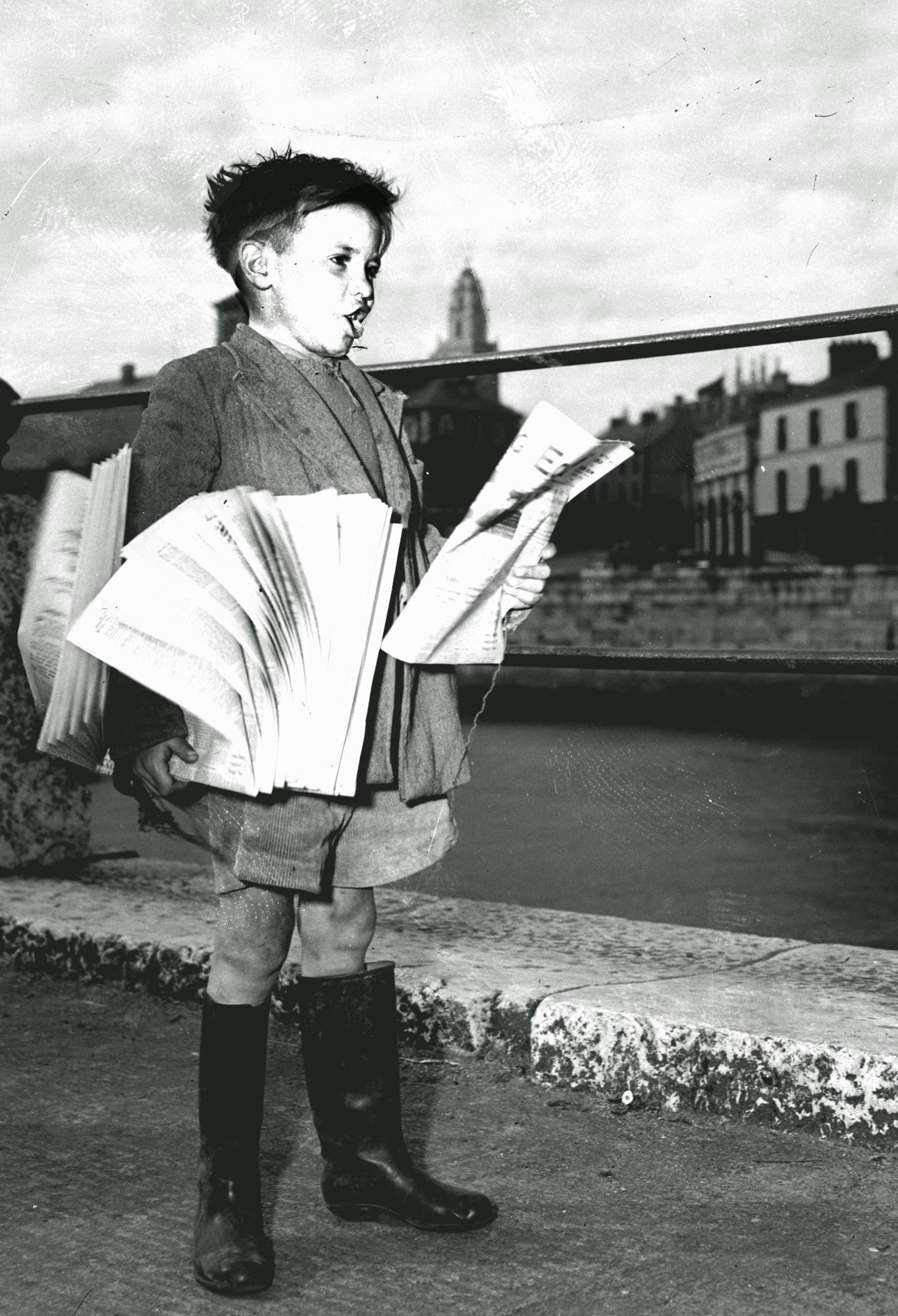 An Echo Boy at Lavitts Quay in Cork city in 1953

One of the newspaper’s legendary early editors was Paddy Kelly, who took charge in 1922 at the height of the Civil War, having arrived from the Dublin Evening Telegraph. Every inch a newsman, he wrote a daily column under the pseudonym ‘Eden’, which appeared above the popular Mutt and Jeff cartoon and was eagerly devoured by readers.

Kelly remained editor until the late 1950s and was succeeded by William Declan O’Connell.

Writing in 2012, proprietor Ted Crosbie said: “Probably the biggest challenge to the Echo was when the Irish Press brought out the Evening Press in 1954. That certainly took 7,000 sales off the Echo and we responded by upgrading its country editions.

“In my time, the country edition was printed at about 3.30pm, the main edition at about 4.50pm. My father always said the Echo was the Examiner getting up late.” 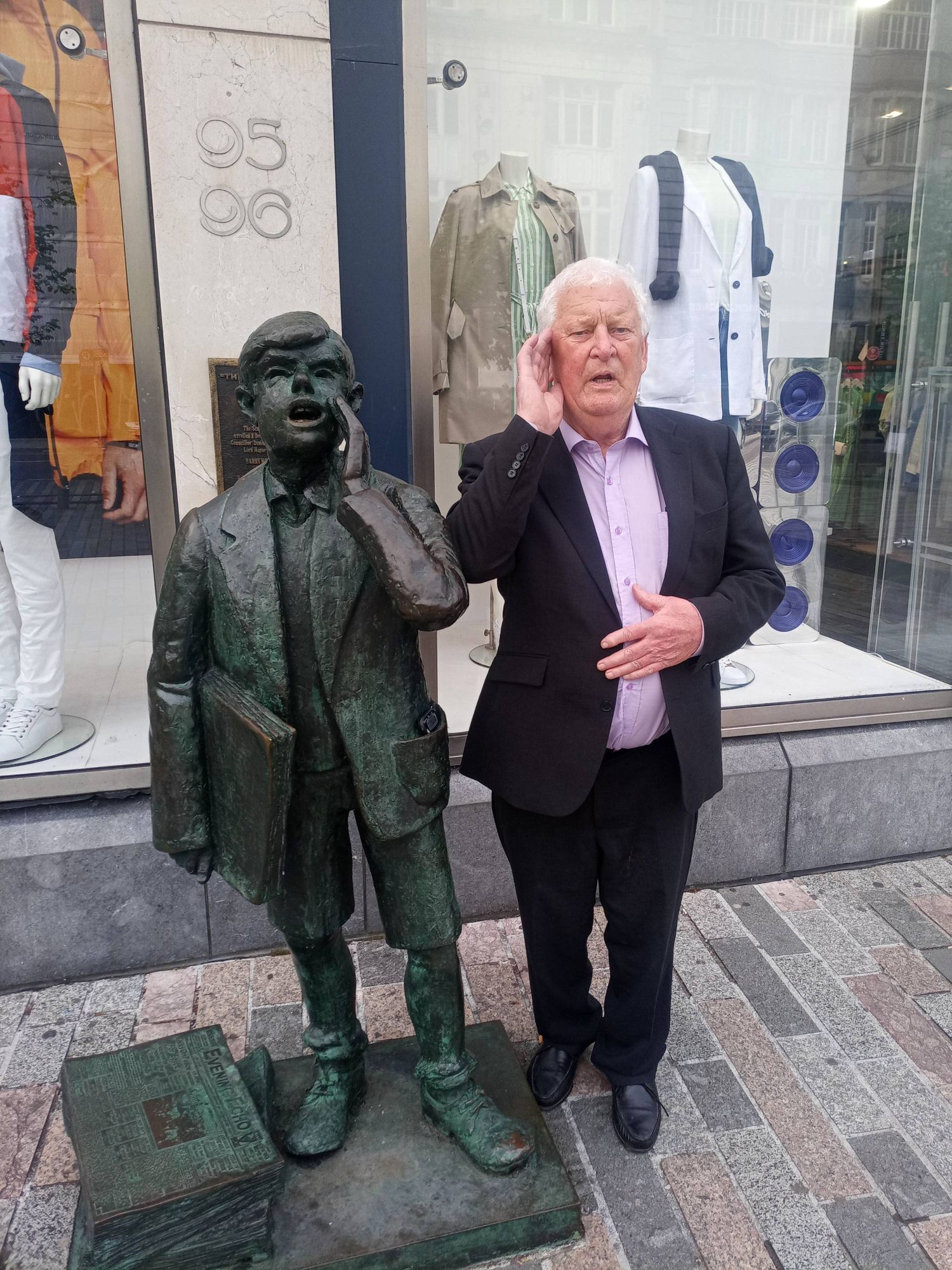 The Saturday Football Echo was a popular addition in the 1960s, printing English soccer results.

Another historic day for the Evening Echo was Saturday, May 8, 1976, which was the last edition produced by hot metal, before it moved to a web offset press the following Monday.

Declan Hassett, Echo editor in the 1980s, recalled reporting on the visit of President John F. Kennedy to Cork, adding: “But Echo days are usually less dramatic than that; the Echo is your forever friend, keeping you in touch with the world... well, Cork. And long may this healthy relationship of reader and newspaper thrive.”

The Evening Echo went compact ‘tabloid’ size on Monday, March 4, 1991, after 99 years as a broadsheet, and a front page editorial by Tim Cramer declared: “We believe that after a century of service to the people of Cork and beyond, this service should now be extended to cater for tomorrow’s people.”

The new-look Echo would be “full colour” and Cramer added: “Bright it will be, sleazy it will not, continuing to be very much a family newspaper.”

The front page ‘splash’ that day, by Tim Vaughan - later editor of the Irish Examiner - was about people smuggling drugs into Cork Prison, using hurleys to volley the illegal substances inside tennis balls over the walls. There was a report on a vigil for the soon-to-be-released Birmingham Six and a headline stated that war loomed in the Gulf, while — perhaps predictably — another declared there was a Cork ‘flood warning’.

In 1992, in a supplement marking 100 years of the Echo, George Crosbie, Chairman of Cork Examiner Publications Ltd, alluded to its political independence down the years. “We continue to believe that for a newspaper to sustain its credibility, it must retain independence, speaking out on behalf of people without fear or favour.”

The intervening years have seen much change in the world of media, with the arrival of the internet, social media, and technology at everyone’s fingertips.

The Echo’s popular website, EchoLive.ie, now carries the same news, sport, and features to its readers in a different form, while the print edition still updates, informs, and entertains the people of Cork.

The Echo remains a constant and familiar friend in the lives of Cork people. Here’s to the next 130 years.

As the legendary Bernie Murphy once remarked: “The Echo? Sure it’s me daza boy!” So say all of us. 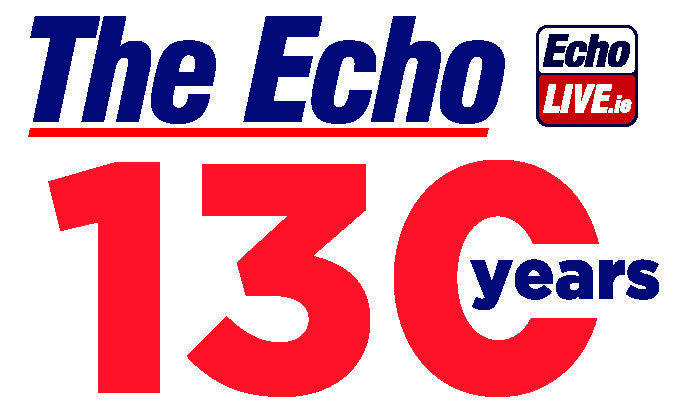 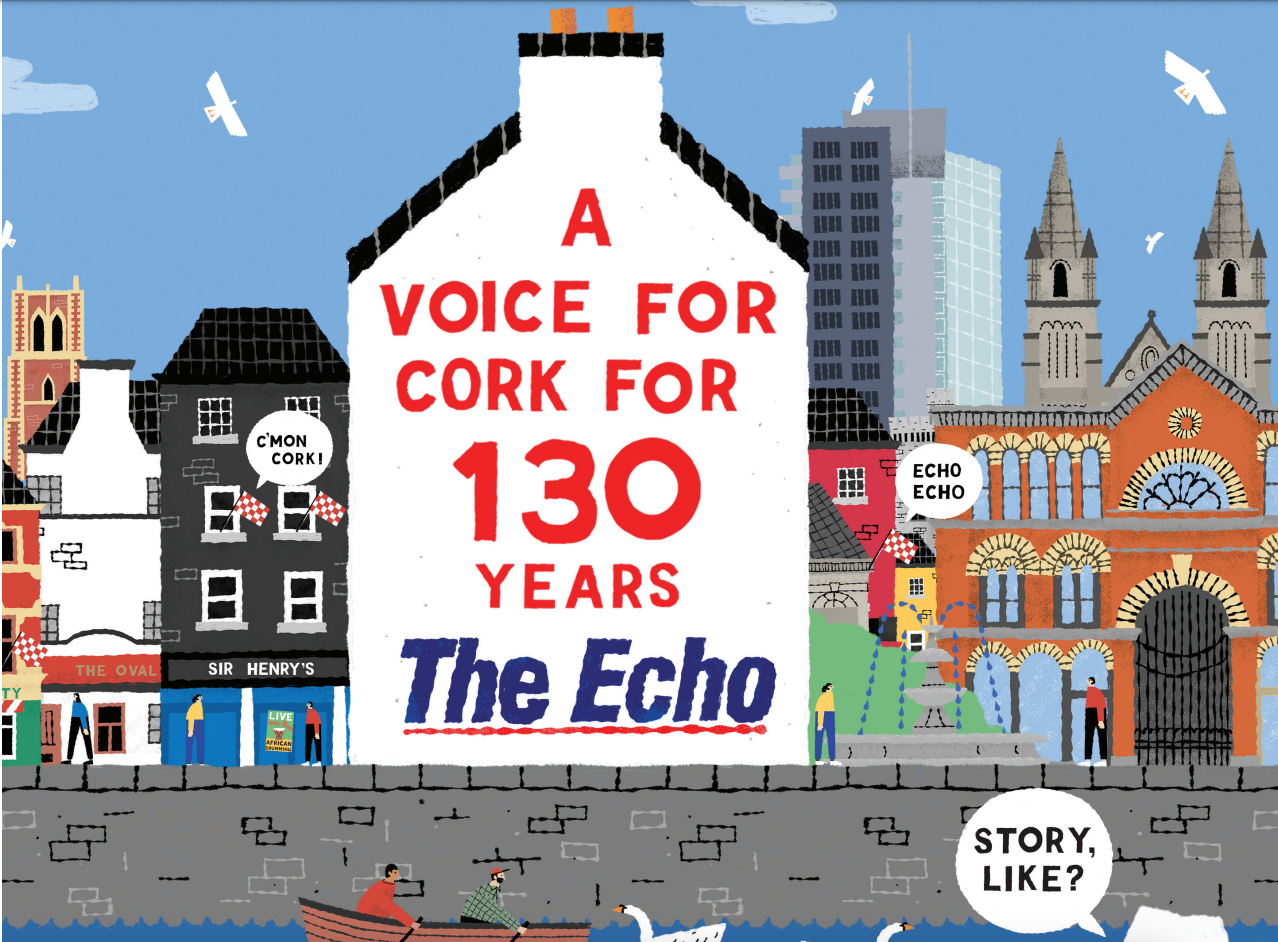