Storm Barra: Swimmers take to the water in Dublin despite storm warnings
 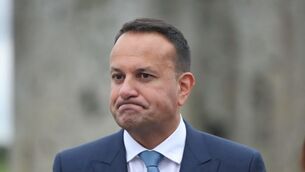