A leak that took seven years to fix - no wonder I hit the roof!
trevor laffan
 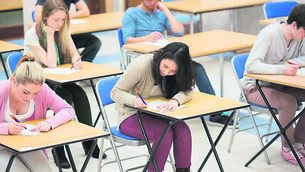