'The issue has dragged on too long': Cork heritage site to remain closed until 2024 at least
cork court
 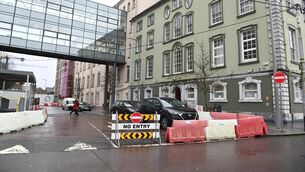