'I can't express enough how grateful I am': Lisa Murphy to begin treatment for eating disorders
cork courtcork crime 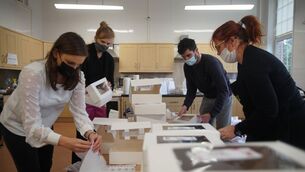